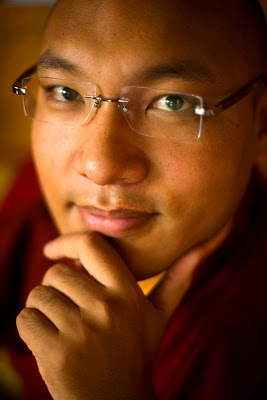 The Kagyu school short lineage begins with the Dharmakaya Dorje Chang. It is not a historical Buddha but one of many enlightened beings that emanate blessings continuously. The Indian siddha Tilopa received the transmission from Dorje Chang and in turn poured this to his disciple Naropa. He introduced the Yogas practice to Marpa the Translator (1012-1097) who made several trips from Tibet to India to receive teachings from various masters. Among them, the transmission of Mahamudra, knowledge and meditation support characteristic in all Kagyupas schools. The lineage continuous through Milarepa (1040-1123) and Gampopa (1079--1153), who added on the Kadampa tradition teachings, until the first Karmapa Dusum Khyenpa (1110-1193), the Karma Kagyu school or Karma Kamtsang founder.

From that time until today there have been incarnations of the Karmapa until the XVII, Orgyen Trinlay Dorje. He currently resides in Gyuto Ramoche Monastery, India. Thanks to His great compassion, continues to protect the Buddha Dharma transmission and in particular, the Kagyu lineage activity. The information on its activities: www.kagyuoffice.org.

The Kagyu school has several branches that have been founded by various teachers. Khyungpo Neljor started Shangpa Kagyu Lineage. He traveled from Tibet to India and received teachings mainly from Sukhasiddhi, Rahulagupta and Niguma, mahasiddha Naropa consort. This lineage has continued to these days thanks to great masters like His Eminence Jamgon Kongtrul Rinpoche and the Most Venerable Kalu Rinpoche.

The Kagyu school is one of the four major schools that survives today along with the Nyingmapa, Gelugpa and Sakya, forming the Vajrayana Buddhism core of the transmission.